Board of Directors, Practice Committee, Teachers

Serves as Ino,  or head of the meditation hall. She studied in the Soto Zen lineage with Sojun Diane Martin, founder and guiding teacher of Udumbara Zen Center in Illinois and Rev. Val Szymanski, Head Priest of Bamboo in the Wind Zen Sangha in California. She was priest ordained in 2019. 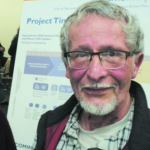