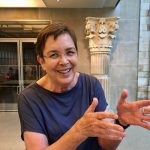 Rev. Renshin Bunce is a California native, born in Marin County and raised in Southern California. In midlife, yearning for a peaceful mind, she began meditating, and met her teacher Myogen Steve Stücky in January of 1994. She made jukai (took her lay vows) with Myogen at Dharma Eye Zen Center in 1996, was priest ordained by Zenkei Blanche Hartman at San Francisco Zen Center in 2003, served as Shuso (head student) with Myogen at Tassajara in 2008, and received dharma transmission from him at Tassajara in April of 2013. Renshin lived at Zen Center for seven years, and then began training as a chaplain. She moved out of Zen Center in 2008 and worked as a hospice chaplain from 2010 until retiring in 2022. She has written two books, Entering the Monastery, a record of her time at Zen Center, which was published in 2008; and Love and Fear, reflections on chaplaincy, which was published in 2020.
Right-click to Download File
Category: Podcasts