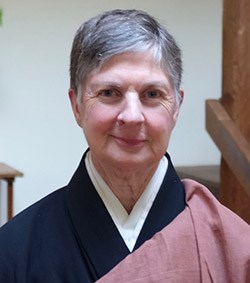 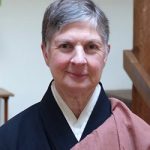 Eijun Linda Cutts came to San Francisco Zen Center in 1971 and was ordained as a priest in 1975. She has lived at Tassajara and SFZC’s City Center, and has resided at Green Gulch Farm since 1993. In 1996 Linda received Dharma transmission from Tenshin Reb Anderson. After having served as Abbess of SF Zen Center from 2000 to 2007, she was appointed Abiding Abbess of Green Gulch Farm Zen Center in 2010, and Central Abbess of SF Zen Center in 2014. As Senior Dharma Teacher, she continues to teach and lead practice periods and retreats at Tassajara, Green Gulch, and elsewhere, and has been leading Yoga-Zen retreats and workshops for many years.