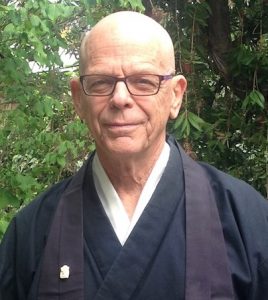 This will be will be a short Dharma talk and small group discussion exploring Suzuki roshi’s saying:
“even if the sun were to rise from the west, the Bodhisattva only has one way.”

So On Jim Hare  serves as Tanto, or head of practice. He lived in the San Francisco Zen Center community from 1980 to 1984, and was lay ordained by Tenshin Reb Anderson in 1985. He served as Head Student at Green Gulch Farm during the spring 2002 practice period. He was priest ordained by Rev. Myo Lahey in 2016.

This evening’s chant: Song of the Jewel Mirror Samadhi